Reflections on the EU and Brexit 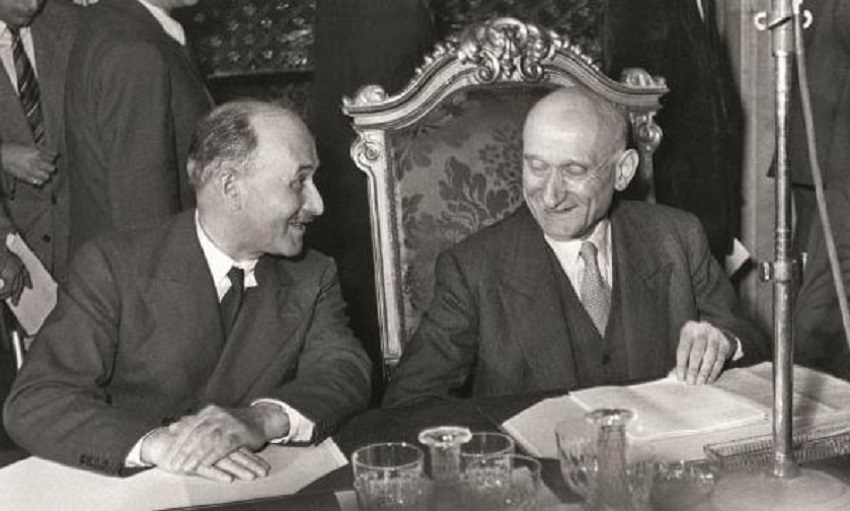 Architects of the EU - Monnet and Schumann.

By our branch member, Ian Cooper

(3/9/20) While waiting to see if we get the Brexit we want, it may seem odd to return to the debate. But it is worthwhile disabusing the Remainers of their idea that the Leavers were just poorly-educated, short-sighted populists and that they, the Remainers, while they lost the vote, somehow had the better arguments and stood on the moral high ground. Another reason for doing it is so that the stubborn Rejoiners think again and give up, whilst Leavers retain their confidence.

The Remainers' conceit arises because, though they unwisely resorted to Project Fear, they felt that they alone understood the full political, cultural and historical significance of the EU vision. It was they who stood against the resurgence of xenophobic nationalism and also looked forward to a Europe able to cope with the challenges of the 21st century, not least the rise of China. So, let’s look at this a bit.

It is perfectly true that the first half of the 20-century was an absolute nightmare for Europe. There were two horrific world wars, which spawned three totalitarian ideologies and then the incomprehensible holocaust. In 1945, Europe was a physical and moral ruin. Into this, stepped genuine well-meaning statesmen like Adenauer, Gasperi, Schuman and Monnet, all Christian Democrats, intent on restoring European civilisation through a united Europe. At such a desperate time it must have seen like a 'no brainer' and thus the EU was born.

There were however two major problems arising from the birth. The first was the all too human tendency, when faced with an extreme, to go to the opposite extreme. Thus, from bloody nationalist conflict, you must completely get rid of the nation state. And this was the foolish long-term EU aim, despite the obvious and deep-seated national diversity of Europe, not least in its many languages.

Now, this was not only vastly impractical but profoundly wrong, as it was bound to undermine the very democracy that the European idea was trying to restore. Democracy is quite simply rule by the people. And the people must feel they belong to a country with a common identity and common language. With nearly 30 countries that was something – the sense of belonging – the EU with its desire for ever closer union, despite the starry blue flag and Beethoven’s anthem, could never create. And so the democratic deficit just grew.

The second problem also arose from the idealism associated with the EU’s birth. So shocking was the memory of Europe back in 1945 that the EU ideal and all the hopes bound up in it acquired a kind of reverence. This made it unpopular to criticise its faults and failings, even when inevitably they became all too apparent. It was seen as disloyal and almost taboo.

But this put the EU dangerously beyond scrutiny and of course, the growing oligarchic bureaucracy were quick to capitalise on this. Thus the scandalous waste, inefficiency and even downright corruption - remember the Santander Commission having to resign? Even worse was the contempt for democracy. Remember the repeat referendums? All were not properly addressed and the general public especially in this country began to see through it.

So, my argument is that the very idealism that the Remainers thought gave them moral authority, was actually the EU’s undoing, and theirs. A much more moderate and practical approach, a European Association of independent and democratically accountable states might have worked. The trick now is for GB to be both independent and successful – and that will involve being tough with the EU – and yet also show the peoples of Europe that we are still good neighbours. Perhaps then they will follow our example and cast Brussels aside.