(12/4/17) The EU referendum may have been targeted by foreign cyber hackers trying to influence the outcome of the historic vote, MPs have warned.

An official website which enabled people to register to vote in the referendum collapsed just hours before the official deadline, forcing it to be extended. Read the full article in the Telegraph.

Support for Brexit hits a five-month high, with 55 per cent of UK population now backing exit from European Union

(16/4/17) Support for Brexit has hit a five month high, with 55 per cent of the population now backing Britain’s exit from the European Union, a new poll has found. A new survey from Orb International shows a four per cent boost for Theresa May in days after she triggered the start of Brexit talks at the end of last month. Read the full article in the Telegraph.

(9/4/17) Britain will be able to increase its exports to India by more than £2 billion per year after Brexit by cutting EU red tape, a new analysis has found.

The UK currently faces significant tariffs on its trade with India because of the European Union's failure to agree a free trade deal. The deal has been held up for a decade by European Union regulations on intellectual property and data protection, with which India is refusing to comply. Read the article in the Telegraph.

(10/4/17) Independent economic forecaster the Item Club – sponsored by City professional services giant EY – today reports a headline prediction of 1.8% GDP growth for 2017. This is well up on even the 1.3% prediction it made last October. Read the post and report on Euro Guido.

(11/4/17) Douglas Carswell has admitted he is “very keen” for Britain to continue allowing unlimited numbers of EU workers into the country - on one condition.

The MP, who last month left Ukip to become an independent in the House of Commons, said free movement of labour should continue, but only for migrants paid more than £24,000 a year by the companies hiring them. Read the article in the Huffington Post.

(9/4/17) Leave Means Leave is setting out a plan for reducing net-migration to 50,000 a year once the UK has left the European Union. In the first blueprint published since the referendum of what Britain’s new immigration system should look like, the Brexit pressure group will call for a full five-year freeze on unskilled migration.

The report, authored by former Ukip migration spokesman Steven Woolfe MEP, sets out in detail how a new bespoke British Working Visa System would reduce overall numbers but continue to welcome the brightest and the best from around the world. Read the full post on Leave Means Leave.

(10/4/17) First detailed blueprint since referendum of what Britain’s new immigration system should look like. Report authored by former UKIP migration spokesman Steven Woolfe MEP – in his first major intervention since resigning from party in October

Calls for a new “fair, flexible and forward-thinking immigration policy” – and the Government to announce immediate immigration cut off for EU citizens in April 2017. Former ministers Owen Paterson MP and Sir Gerald Howarth MP back the new British Working Visa System – calling for a return to mid-1990s levels of immigration. Read the full article and view the report on the Leave Means Leave website.

(28/4/17) This is a story that you may not have come across because it’s been shunned by most of the world’s media. It’s a story about a new report recently published by top economist, Professor David Blake, in which he argues the City of London can become stronger after a “clean” Brexit and an even greater World Financial Centre. Read the full post on Reaction.

Web trolls target Michael Caine after he hails Brexit, saying 'I'd rather be a poor master than a rich servant'

(6/4/17) Sir Michael Caine hailed Brexit as a vote for freedom from rule by ‘faceless civil servants’ yesterday. But while some praised the 84-year-old film star for his ‘sane’ views that ‘hit the nail on the head’, he faced a torrent of abuse from Remain-supporting internet trolls who branded him an ‘old and senile bigot’. Read the full article in the Daily Mail.

(7/4/17) Labour, Lib Dem, and Greens have colluded to draw up a hit list of Leave supporting MPs in Remain supporting constituencies to “go after” and attempt to depose at the next election. Read the article on Breitbart London.

Why economic forecasts get the impact of Brexit wrong

(5/4/17) Professor Philip Booth writes: The economics profession has not exactly covered itself in glory in recent years. Few people forecasted the crash. Forecasts of economic recovery after the crash were dreadful. Neither the Office for Budget Responsibility nor the Bank of England have had a particular good recent record and, also, the widespread forecasts of doom and gloom in the event of a Brexit vote have proven to be wide of the mark. Read the full post on the IEA website.

(06/04/17) Excellent article by UKIP's Patrick O'Flynn who recognises that luck played a massive part in us winning the EU referendum. Read the full post on Brexit Central.

5/4/17) Former UKIP leader Nigel Farage likened the EU’s stance on a Brexit divorce bill to organized crime during a European Parliament plenary session in Strasbourg on Wednesday. “You’re behaving like the mafia, like we’re a hostage. We’re not — we’re free to go,” Farage said to loud jeers from fellow MEPs. Read the article and see the video on Politico.

Speaking to MEPs at a plenary debate in Strasbourg, Barnier also issued a blunt warning to London against pursuing simultaneous discussions of divorce terms and the future relationship between the EU and U.K. Read the full article on Politico.

(4/4/17) Comedians have told how anti-Brexit jokesare killing their careers as audiences outside of London walk out in offence.

A number of comedians have described scripting their take on Britain leaving the European Union for left-wing audiences in London, only to face unamused audiences when they take their acts out to the rest of the country. Read the full article in the Daily Telegraph.

Is the government’s Great Repeal Bill a missed opportunity to slash red tape?

(31/3/17) Len Shackleton, professor of economics at the University of Buckingham, says Yes. Adam Marshall, director general of the British Chambers of Commerce, says No. Read the argument in City A.M..

(4/3/17) Mr Robinson had said that while the BBC had to be impartial, it was “not the same as ‘balancing’ one ‘side’ reading out ‘lines to take’ with other ‘side’ doing same. “Referendum is over,” the BBC’s former political editor said. Meanwhile, Mr Farage, a leading figure in the Leave campaign, responded: “Simply can’t believe Nick Robinson thinks that the taxpayer-funded BBC does not need to provide balance on Brexit.” Read the full article in i News.

Cultural clash between Europeans and the British could sink Brexit negotiations

(30/3/17) One of the key issues in Brexit negotiations has not been recognised - European politicians find their UK counterparts very difficult to work with. To them, the British appear arrogant, insensitive and contrary. The reason for this is the yawing gulf that separates Britain and Europe over the rules of political engagement. Read the full article in the Daily Telegraph.

(2/4/17) European leaders have warned the UK that it will face a divorce bill of up to £50billion for outstanding commitments and pension liabilities. However The Telegraph understands that officials are currently drawing up a register of the UK's assets in the European Union as part of negotiations.

In addition, a Government source said: "This is being presented in a binary way as a divorce bill, in which we owe them. It's not like that. It's more like leaving a gym or a club. You don't continue to pay for other people to use the facilities after you leave". Read the full article in the Daily Telegraph.

What does triggering article 50 mean for young people?

(29/3/17) As the UK takes the first official step towards Brexit, young writers give their views on what this means to them. See their views in The Guardian.

Theresa May must be ready to walk away from the EU

(31/3/17) Comment from the Telegraph: The UK must be prepared to walk away from the Brexit negotiations without a deal. This week, Theresa May made a perfectly reasonable, even conciliatory, opening gambit to the EU. The EU has replied with insults and threats to the future of Gibraltar. If its goal is to tie us up in ridiculous distractions for two years, and even dictate the kind of economy that we will have after leaving, then Mrs May must make it clear that Britain would rather walk than talk. Read the full article.

(31/3/17) The EU has put the future of Gibraltar at stake in the coming Brexit negotiations, in effect backing Spain in its centuries-old dispute with the UK over the British overseas territory. A clause in the nine-page draft document outlining the EU negotiation position suggests that unless Britain is willing to let its citizens on “the rock” be subject to an inferior economic future than those in the UK, the EU has in effect handed the Spanish government a veto on Britain’s entire future relationship with the bloc. Read the full article in the Guardian.

Article 50 was designed never to be used. Now we're heading into dangerous and unknown territory - by Gina Miller

(28/3/17) Quote: "People like myself – calling for a transparent, scrutinised Brexit negotiation process to ensure it is not executed at the cost of Parliamentary sovereignty".

If Parliamentary sovereignty is so important to Gina Miller, why was she happy for the UK Parliament to consistently hand over more and more of it to the EU? What a hypocrite! See her article in the Independent.

(28/3/17) The House of Commons estimates that ministers will have to import 19,000 EU rules and regulations into the statute book. There is an irritating conceit among some Remainers that Europe has civilised the UK, that without our membership we would still be sending children down pits. On the contrary, Britain has been the originator of a great deal of progressive legislation. Read the full opinion article in the Daily Telegraph.

The brilliance of Brexit

(29/3/17) Campaigners, politicians and writers on why Brexit is a great thing. See Spiked Online.

Paul Nutall: UKIP will be the "Guard dogs of Brexit" 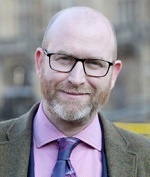 (29/3/17) Paul Nuttall commenting today, on the serving of the letter invoking Article 50 said, “While negotiations continue we will continue to be the 'guard dogs of Brexit', holding the Government's feet to the fire at home and our MEPs will be working to ensure our friends on the continent do not pull any fast ones. We will provide the political threat to ensure no backsliding takes place and ensure that Brexit does indeed mean Exit." Read his full statement on the UKIP website. 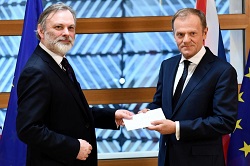 (29/3/17) Theresa May has vowed to forge a 'bright future' for Britain after our historic EU divorce letter was finally delivered - including a stark warning to Brussels that punishing the UK on trade would mean losing cooperation on security and terrorism. In a day of high political drama, the Prime Minister was cheered to the rafters by Tory MPs in the Commons as she confirmed her envoy Sir Tim Barrow had handed the formal notification to European Council president Donald Tusk in the Belgian capital. See the pics and full article in the Daily Mail. 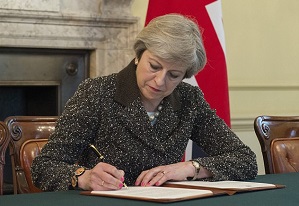 27/3/17) Mrs May last night signed the letter to European Council president Donald Tusk informing him that the UK is triggering Article 50 of the Lisbon Treaty, the formal method of leaving the 28-member bloc. The letter was due to be conveyed to Brussels by diplomats last night to be handed to Mr Tusk by our ambassador to the EU Sir Tim Barrow at lunchtime today. It starts a two-year process that will see the UK leave on March 29, 2019. Read the full article in the Daily Mail.

UK businesses are confident about their post-Brexit future and few are making strategic changes, survey reveals