How dare the House of Lords defy the people 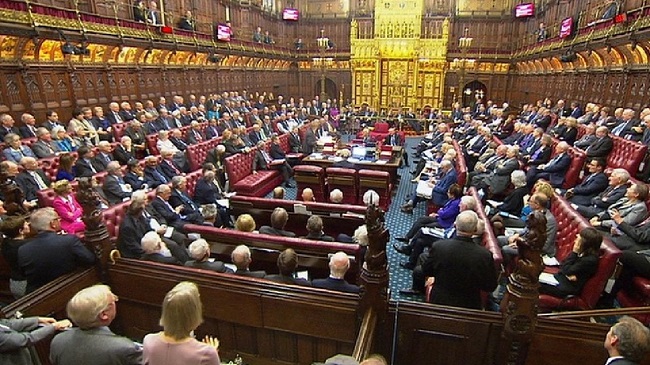 This article was an email sent to UKIP members by Freddy Vachha, UKIP Chairman - London Region

Recent "moral" (sic) posturing emanating from Brussels causes me to reflect on appalling events of just over a century ago, which only ceased due to international pressure, much of which was from Britain. We don't need to be hectored by Brussels, nor is it welcome as, or competent to be, guardian of our own sense of ethics, fair play and basic humanity. Perish the thought. Most of its ruling class aren't even adequate enough to serve as mayors of small towns.

THE HOUSE OF LORDS DECIDES TO HELP BRUSSELS, NOT BRITAIN

And on Wednesday 1st March 2017, exactly a month prior to April Fools Day, the House of Lords voted 358-256 (click here) to, in effect, blackmail Britain, derail the Brexit that's needed to free us from Brussels misrule, or both.

Let me explain why I interpret the vote in this apparently radical manner. No more pictures are needed - the one above clicks through to disturbing enough supportive material - since they will distract.

The effect of yesterday's upper chamber vote was to insert a clause within the Brexit bill to guarantee the residence rights of all (non-UK) EU citizens now living here - irrespective of any continental reciprocity.

Unless the government really gets its act together pronto, and forces the original, unamended legislation through, perhaps using the Parliament Acts, the effect of the insertion would be to either:

(a) Cause the government to abandon or fail to meet its March 31st deadline for triggering Article 50, or

(b) Coerce the government into accepting the modification, i.e. to get it passed in the House of Commons, or

(c) Ignore Article 50, part of a cunningly-contrived Thieves' Charter as it is, and repeal ECA72 instead. Let us take the driving seat, and exit on our own terms, before they raise and send out a real army to keep us in. I will consider these alternatives in turn.

I was one of many from UKIP who gathered outside and then peacefully invaded Parliament on November 1, 2014 to protest this erosion of our democratic heritage - the removal of our remaining rights to veto or opt-out of EU legislation.

If (a), namely Article 50 triggering delayed beyond March, our right to exit becomes subject to QMV (Qualified Majority Voting) among EU members. This pernicious requirement will sink any acceptable Article 50 Brexit.

How? Given that the UK is an enormous net contributor to the EU's coffers, the recipients or beneficiaries of our largesse (i.e., all other 27 member states, including Germany, whose contribution would have to hugely increase to compensate for our leaving) are highly unlikely to vote in sufficient number to let us leave without imposing impossibly onerous conditions upon our leaving. A one trillion Euro "exit fee", anyone? And why should they stop there?

I would think we'll then see who our true friends are - I think at least Denmark will support us. But we need many more friends under QMV. We won't get there, even if favourable changes at the helm in Holland, France etc. occur.

By the time the likes of Arch-Remainer Lammy manage to figure all this out, and possibly even realise that simply repealing the European Communities Act 1972 (the Gerard Batten MEP method) should have been the route of choice, our "friends" could have a European Army ready... and then there might be no way out at all until the whole thing falls apart. We won't be in the lifeboat ready to help them - we'll be on the sinking ship too, sucked down in the vortex.

GIVES IN TO THE LORDS

If (b), the government cedes the right of abode to all currently resident EU citizens, it is doing something similarly monstrous to Gordon Brown preannouncing the sale of our gold reserves. Besides encouraging a veritable flood of newcomers, it will mean that we have lost, for no gain, a powerful bargaining tool and so cannot protect our own citizens living in other EU states.

Previously, we could be totally sure our own expats living in, say, Germany would not be expelled after Brexit even if the Brexit terms were silent on this, because if they tried that, we could do to the same to German expats here.

But if we'd already unilaterally legislated to protect the rights of those EU citizens here, our government's hands would be bound, and there would be no way to ensure that our guarantees, enshrined as they would then be in statute, would be reciprocated abroad to the benefit of our expats. Instead, our goodwill could be cynically used against us by the likes of Tusk (van Rompuy II), Juncker, Verhofstadt, a re-emergent Schulz (else the crazed Haus Frau) and others of their ilk.

We've had a surfeit of proof that simply trusting that lot to do the right thing would be scandalously absurd. Even, criminal.

So, it begs the question - why would the Lords try to reduce our bargaining power, and thereby put at risk the well-being of a million of our own citizens living in other EU states? We've already issued and reissued assurances in the clearest terms that three million EU citizens over here will be dealt with fairly. There's no moral imperative for interference from the unelected chamber.

If (c) - I've no issue with this. Repeal ECA72 now, using the Crown Prerogative. The Supreme Court has had enough time to reflect on the fallout of its last unfortunate intervention, surely?

For if the prerogative was invoked to get us in (to what appeared to be a decent common market, and no more), the same thing can be used to get us out of the current, indecent, anti-democratic, lunatic-fuelled, dangerous, autocratic, unaccountable, suprabureaucratic, arrogant, aggressive, delusional, monstrously expensive kleptocracy.

Any legal argument against that which takes more than 5 lines to expound is self-evidently contrived and bogus.

Whether the cause of the mess is lordly stupidity (or at least an inability to navigate a rational, logical canal of thought through to its end), a desire to thwart the will of the people, self-loathing, something else, or some combination thereof, I cannot say.

Whichever it is, the fix to prevent reoccurrence is either:

(a) Urgent abolition of the House of Lords, however otherwise undesirable given that there is sometimes need for reflection, or
(b) an urgent cull (for the avoidance of doubt, I mean en masse expulsions or retirement) of peers who cannot demonstrate they aren't senile, and

(c) The elevation of many UKIP members to the Lords, to balance out and negate the pernicious effects of the preposterously numerous Libdem and overly numerous Labour peers, and thereby bring numbers at least vaguely in line with 2015 general election popular vote and Referendum result ratios.

At present, we are under-represented by (arguably) up to one hundred times...

While this long overdue correction is in progress, I counsel the P.M. to do something radical - deploy the Parliament Acts to defeat the Lords and so trigger Article 50 in time, or pay heed to Gerard and repeal ECA72. She's read his EU Referendum FAQ I sent her, and also the Nelsonian Eye paper.

UKIP will ensure that doing nothing, while pretending not to be doing nothing - Theresa's unkept, silently dropped pledge to get net migration down to tens of thousands during the course of the previous parliament has not been forgotten - is simply not an option.

You can help motivate those in power by complaining to your MP here.

Those in the House of Lords who have knowingly colluded in this attempted derailment are demonstrated to be part of a malicious conspiracy to blackmail, if not commit Referendum fraud upon, the British people.

Treason too, perhaps. Shame on them!

After writing the above, and while reflecting on its wisdom, I was reassured to read our enjoyably erudite letter-writer Hugo Jenks advancing a similar, far less prolix, argument.