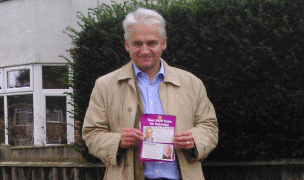 What a fantastic action day we had in Coleridge ward on Saturday October 18. More than 20 members and supporters came to leaflet the ward and we got round nearly all of it in three hours.

Back at the Med pub on Perne Road afterwards, it seemed like pretty much the whole bar was full of UKIP supporters - including the local drinkers who had only come in for a Saturday lunchtime pint. The UKIP battle bus in the car parked attracted plenty of toots of support from passing traffic as well.

With Bill Kaminski lined up to contest the ward in next year's city council elections, we were able to produce a strong leaflet raising the profile of both me as parliamentary candidate and Bill as the ward candidate.

This is a format I aim to repeat across our other target wards, with leaflets customised per ward. But of course, this needs us to have someone ready to commit to standing for the city council in each target ward so that we can feature them on a leaflet.

When I was adopted as a candidate, I said that if I failed to become MP for Cambridge next year then at the very least I wanted the campaign to have left us with an enhanced local party, with half a dozen or more candidates for the council who are in a good position to get elected in future years.

So the immediate quest is for members who will commit to standing in Cherry Hinton, Abbey, East Chesterton, Kings Hedges, Arbury and Trumpington wards in 2015. This will allow us to mount action days in those wards with a leaflet designed along the same lines as the Coleridge one. Ideally each candidate would live in which they wish to stand. So please get in touch with Martin Hale or the Cambridgeshire regional organiser Peter Reeve if you are ready to step up - we really need you.

On a wider front, I think the Coleridge action day really proved that there is an appetite for UKIP in Cambridge, particularly in the wards on the eastern and northern sides of the city. It will be interesting to see the response to the email address on the leaflet in the days ahead. What I am really hoping for is to attract a couple of new members and some other people ready to be active supporters for Bill's ward campaign next year.

Our current plan is for the next action day to be on a Saturday in late November, probably November 22nd (two days after the Rochester by-election!). Which ward we go for depends in part on where we find council candidates. Ideally I would like to go next for the adjoining Cherry Hinton ward.

Once again, thank you to everyone who turned out to leaflet during our action day or just to show their support afterwards. We have put ourselves on the map in Cambridge and are ready for further advances.

I hope to see you all at the next one and a few new recruits as well!