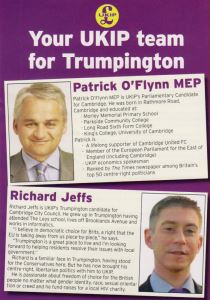 Well, what a great week for UKIP. The win in Rochester and Stood by Mark Reckless has underlined the point that UKIP can succeed almost anywhere. This constituency was 271st on our target list.

I went to Rochester four times to campaign for Mark and to help advise him on various aspects of the campaign. But I spent polling day itself in Cambridge. First up was an interview with Jon Vale for the Cambridge News that sparked major coverage and a further rise in my profile as someone who is "in it to win it" in Cambridge. www.cambridge-news.co.uk/UKIP-Cambridge-parliamentary-candidate-Patrick-O/story-24588607-detail/story.html

Then I did an interview for the student online newspaper The Tab. And finally, I spoke at a debate in the Cambridge Union Society, proposing a motion that "UKIP has been good for British politics". I was supported both by Tory MP Peter Bone and my fellow UKIP MEP Jim Carver (West Midlands).

Although we were heavily defeated - as I knew we would be before a student audience - our speeches were heard respectfully and I was pleased to receive strong applause from a significant section for my argument that UKIP was offering important new choices to the electorate and also making other parties sharpen up their acts.

During my undergraduate years at Cambridge I was a member of the Union Society, but never spoke in one of its debates. I was probably, in truth, a bit unnerved as a comprehensive school product pitched in among young people from Britain's most famous public schools who seemed to have unlimited reserves of self-confidence.

But 30 years on from arriving as an undergraduate at Kings College, I have lived a lot of life and going toe to toe with anyone in debate does not phase me.

After the Cambridge Union debate, I stayed over with my mum and stayed up till the early hours watching by-election coverage. I particularly enjoyed watching cool-as-a-cucumber Suzanne Evans representing UKIP and making the other party representatives squirm with her incisive points.

Friday was spent in London - with an appearance on the Daily Politics and some time helping out at our Brooks Mews London office. But it was Saturday that brought my own highlight of the week - our second Cambridge action day. This time in Trumpington ward.

We had another splendid turnout of activists to deliver a leaflet introducing me and our council candidate Richard Jeffs to the voters of Trumpington. Our leaflet stressed in particular the iniquities of the inheritance tax regime in a ward where house prices are sky high.

Then it was back to the Tally Ho pub for a lunchtime drink. And my goodness, the Cambridge and South East Cambs branch is in great spirits. All the talk was of new members joining and the potential we have in this area. With the South East Cambs candidate selection due on Friday, I will also soon have a branch running mate too.

We will decide this week whether another Cambridge action day is achievable next month, but with December being so dominated by Christmas preparations it may be that we next pound the pavements in January. We will let you know in good time.