The Facts About Inward Migration 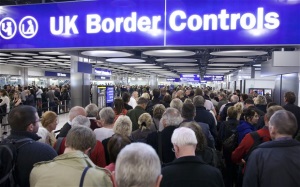 I was always brought up to believe that, as far as is reasonably possible, you should always go by the facts. So, what do the facts tell us about immigration?

Well, the final set of quarterly figures before the election shows the largest net intake since the Coalition was formed in 2010. This is well above the level David Cameron inherited and massively over the numbers he promised.

Today's figures update the estimates in November. It’s worth noting that:

For most ordinary people, these figures are hard to take in. The total figure of new arrivals in the UK amounts to the size of a medium size English city such as Nottingham.

To give you some idea of the impact of such large numbers, Nottingham has 15 secondary, 80 primary and 5 special schools, as well as two universities. In addition, it has the fourth largest acute teaching hospital trust in England as well as the largest publicly owned ‘bus network in the country.

Such is the infrastructure needed to provide for the number of people coming to live in this country EVERY YEAR. So the questions for our politicians are:


The ONS also calculates that, on current trends, we will have 10 million more people over the next 10 years.

So, the following facts are worth thinking about:

The only reasonable and sensible approach to this is controlled immigration, an approach supported by the majority of people in this country.

But none of the major parties can or will deliver this because they are locked into the principle of the free movement of peoples, one of the five founding principles of the EU.

The only party that will limit immigration to sensible levels, through a points-based system like Australia, Canada, and the United States, is UKIP.

So, if you are concerned about keeping our immigration under control with sensible limits that the country can cope with, vote for UKIP - the only party with the policy, and the will, to do this.